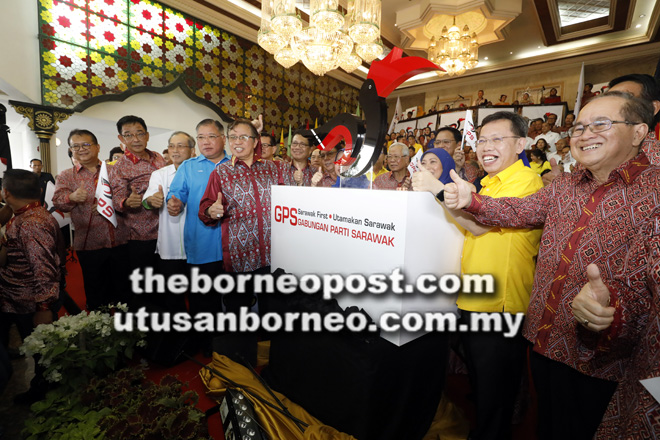 Abang Johari (fifth left) together with (from left) other GPS coalition leaders giving the thumbs-up after the launch of the GPS logo at the PBB headquarters on Jan 8 last year. — File photo

Jayum also believed that since now is “troubled times”, GPS has more reason to join a coalition at the federal level.

“Strategically, wisdom tells us that supporting a faction in need means one’s value in political negotiation is enhanced.

“In troubled times, remaining neutral is not an option,” he said when contacted today.

Jayum was asked to comment on the political manoeuvring involving several parties in the Klang Valley yesterday to allegedly prevent PKR president Datuk Datuk Seri Anwar Ibrahim from becoming the next prime minister.

GPS chairman Datuk Patinggi Abang Johari Tun Openg was also in Kuala Lumpur yesterday to meet the coalitions parliamentarian before he had reportedly met political parties from both sides of the divide.

The chief minister, who had previously maintained that GPS is independent, is scheduled to hold a press conference here tomorrow evening.

On whether Dr Mahathir’s political move could be a “backdoor” attempt at forming the government, Jayum said there was no such thing.

“It is political manoeuvering by a leader of a ruling party or coalition to secure support to sustain his rule and his ruling party,” he said.

“Political realignment normally occurs because of changing political situations since the last elections. This is not uncommon in any democratic society including in the West,” he added

In pointing out that such a move was democratic as long as any faction that is appointed to govern has the support of the majority in the 222-seat Dewan Rakyat, Jayum said holding a fresh election could be a solution if it is unclear who has the majority in parliament.

Jayum said the Court is not a place to settle politics.

“I think GPS is assessing the situation and are waiting until there is certainty at the federal level before they commit,” he told The Borneo Post.

However, he too agreed that the so-called “backdoor coup” by Dr Mahathir’s supporters is not unconstitutional because to assume power, one only needs to get the support or confidence of the majority of the legislative branch.

Arnold reckoned that the Yang Di Pertuan Agong was now assessing who between Dr Mahathir and Anwar has more support in parliament.

If a new coalition is formed to lead the government without going back to the people, then it is going against their will and therefore undemocratic, he said.

Arnold said he believed the best situation to settle the impasse is for the Yang Di Pertuan Agong to reach out to different leaders and to independently assess who has the majority support in the house.

Another way to end the impasse is for Dr Mahathir and Anwar to stick to the succession plan as agreed, he added

“Better still, provide a clear timeline for the handover of power to Anwar. This issue happens because there are a lot of uncertainties surrounding the succession plan.”

Arnold, however, thinks the Court can be part to resolve any political issue.

“Yes as far as the Yang Di Pertuan Agong is concerned, he may refer to the Federal Court and the Court may make its opinion on the matter (Article 130).”