While the automotive world was focused on the Los Angeles Auto Show, Hyundai quietly introduced the Lafesta EV in China.

Set to be launched early next year, the Lafesta EV has a “Sensuous Sportiness” design that differs significantly from the standard model. The most obvious changes occur up front as the model has been equipped with a new fascia that lacks a grille.

The end result is a bit generic, but there’s a prominent Hyundai logo which is flanked by chrome trim and LED headlights. Further below, we can see new fog lights, vertical air intakes and a unique bumper. 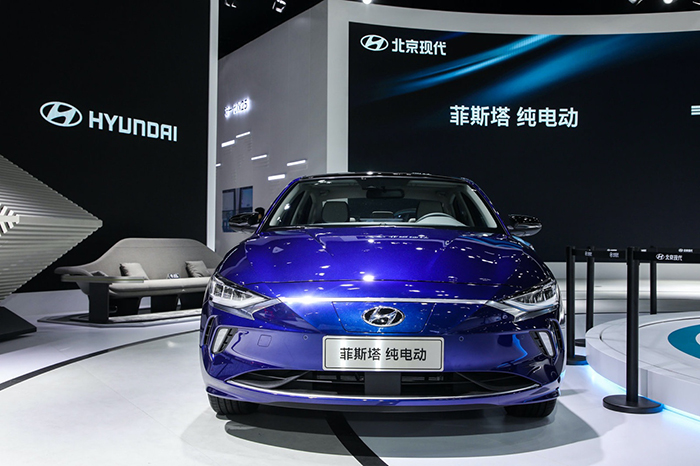 The styling changes continue out back as the model adopts an aerodynamic rear bumper with a slim reflector that spans nearly the entire width of the vehicle. Since the model is electric, the dual exhaust system has been jettisoned and replaced by a discreet diffuser. The car also has aerodynamic wheels and a revised color palette that includes an EV-specific hue called Shooting Star.

While the exterior styling changes are pretty extensive, the cabin largely carries over. As a result, drivers sit behind a flat-bottomed steering wheel and find themselves looking at 7-inch digital display in the instrument cluster. To their right is a 10.25-inch infotainment system which features an EV-specific navigation system that shows nearby charging stations.

Other notable highlights include a wireless smartphone charger, black trim and an electric shift-by-wire gear selector. More interestingly, the Lafesta has a voice recognition system that allows owners to control a variety of features including the panoramic sunroof and power windows.

Hyundai didn’t say much about performance specifications, but confirmed the car has a 56.5 kWh battery pack which powers an electric motor that develops 201 hp (150 kW / 204 PS) and 229 lb-ft (310 Nm) of torque. This enables the car to travel approximately 304 miles (490 km) on a single charge, according to local calculations.