REDSTONE ARSENAL, Ala. — Sixty-two of the first iteration of mounted anti-jam GPS devices were equipped into light armored vehicles in Germany over the past month, with thousands more scheduled to be installed into U.S. European Command vehicles by 2028, said Army leaders in charge of location data on future battlefields.

The Mounted Assured Precision Navigation & Timing System — known as MAPS — was developed to provide trusted positioning, navigation and timing (PNT) to a platform, such as Stryker vehicles, by pairing a GPS receiver with an anti-jam antenna, said Col. Nickolas Kioutas, PNT project manager.

Read more about MAPS, along with other anti-jam systems, here. Also look for our anti-jam feature coming in the December issue of GPS World magazine.

The electronic technology comes amid the Army’s vision for 2028, to best prepare soldiers for possible warfare with near-peer competitors, who have used electronic warfare to disrupt communications vital to Western forces in recent years.

This year, more than 300 Stryker vehicles, all from the 2nd Cavalry Regiment, are expected to be fielded with MAPS technology, said Willie Nelson, the director of the Army’s Assured PNT Cross-Functional Team.

Upgraded first-generation and second-generation technology is also expected to be unveiled in the future.

The Army also plans to equip armored brigades with the technology, and put MAPS in vehicles such as the Bradley Fighting Vehicle, M1 Abrams tank, and the M109 Paladin self-propelled howitzer. After those “priority vehicles,” the Army will evaluate the mounted device in second-tier priority vehicles, Nelson said. 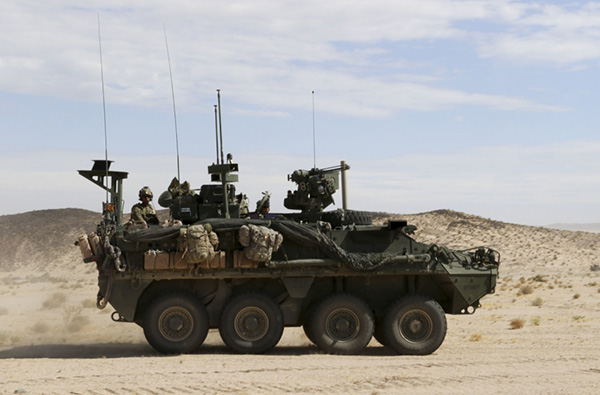 Soldiers from 2-2 Stryker Brigade Combat Team move out in their Stryker during their training rotation at the National Training Center on Fort Irwin, Calif., Sept. 2, 2019. (Photo: Sgt. Ryan Barwick/U.S. Army)

In the past, armored vehicles have used multiple Defense Advanced GPS receivers, known as DAGR devices.

In addition, future iterations of MAPS will include non-GPS sensors by fusing GPS with alternate navigation and timing technologies to ensure accurate PNT that soldiers can trust while operating in various threat or denied environments, according to a statement.

A single-point GPS also creates multiple practical benefits for soldiers, such as less maintenance and system key-failing, Kioutas said, adding many of his team’s decisions are based on Soldier feedback, because listening to them today helps prepare them for tomorrow.

Simply put, “MAPS continues to work whenever a GPS signal is weakened or compromised,” he said.

“This is the first technology equipping for the Assured Positioning, Navigation and Timing Cross-Functional Team, and one of the first for Army Futures Command,” Kioutas said.

Nelson noted that they’re “working in parallel with both mounted vehicles and dismounted soldier’s PNT gear.”

A soldier checks part of a Mounted Assured Precision Navigation & Timing System — known as MAPS. Sixty-two of the first iteration of mounted anti-jam GPS devices were equipped into light armored vehicles in Germany over the past month, with thousands more scheduled to be installed into U.S. European Command vehicles by 2028. (Photo: John Higgins)

Earlier this year, a requirements document for the dismounted soldier’s PNT was signed. Now, currently in the prototyping phase, the latest iteration of a dismounted GPS receiver can send secure PNT data wired or wirelessly, Kioutas said.

“A lot is happening here, a lot of good success,” Nelson said, adding, the most important thing for his team is to get the best equipment to “warfighters on the front lines and getting their feedback rolled back into the next generation.”