HUAWEI’S latest smartphone was launched earlier this week and tech enthusiasts can pre order and get their hands on one now,

The Huawei nova 5T offers a smartphone with pro-grade camera experience and packed with flagship performance wrapped in an exquisite design.

One problem that smartphone cameras usually have is taking photos in low-light conditions.

Huawei solves that on its nova 5T – with the aim of capturing every detail in low-light. It does that by having a wide f/1.8 aperture, a 1.6μm four-in-one light fusion, AI stabiliser and laser autofocus.

At the back, is an array of four cameras that together work to give you the look you want for your image. Firstly, is a 16MP super-wide angle camera that offers 117° front-of-view at f/2.2 aperture and that opens up more views and takes in much more angles within the scene. 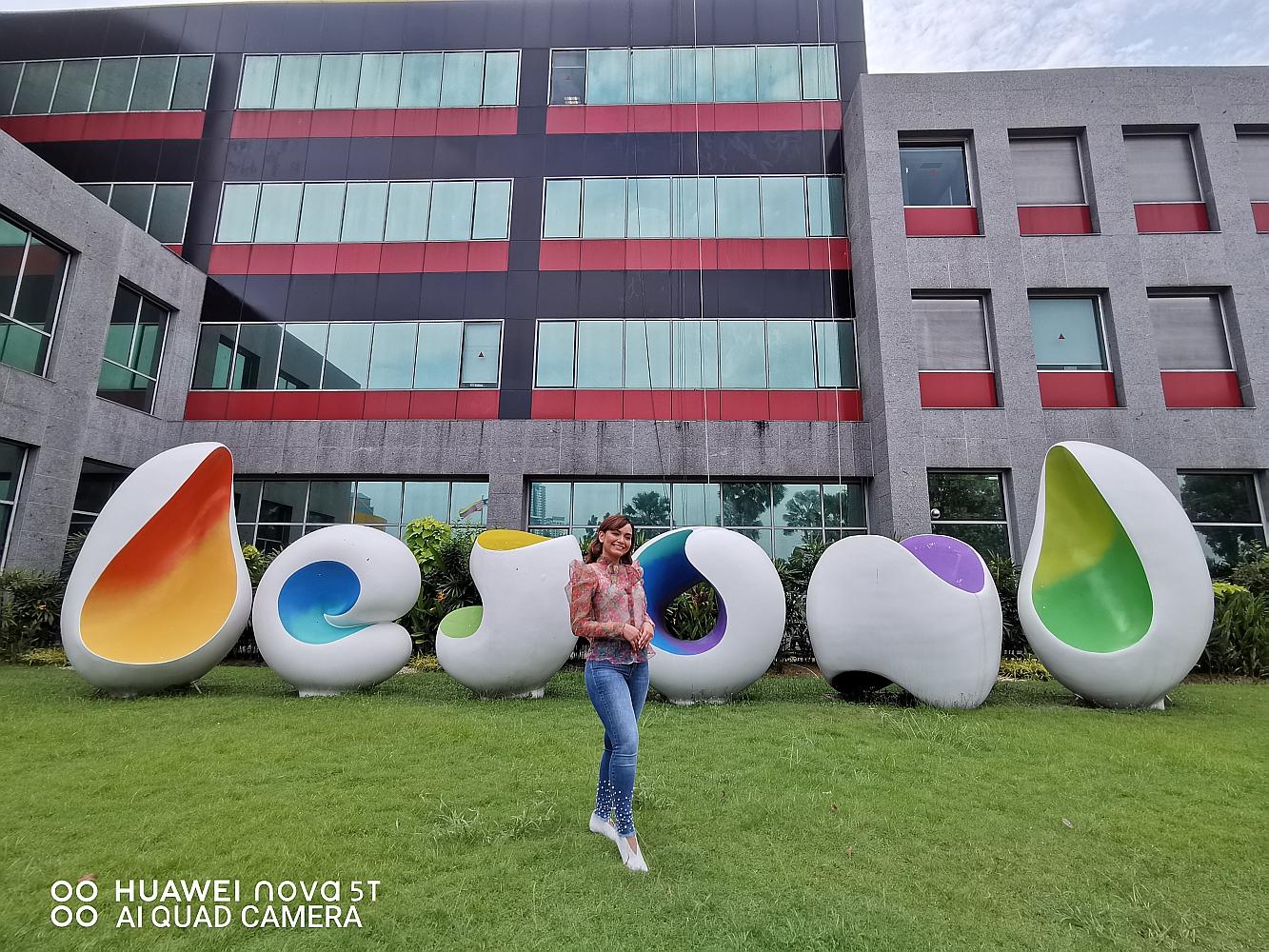 Super wide angle lens lets you take in the whole surrounding within the frame of your shot.

Next in the array is a 48MP main camera that employs a Sony 1/2-inch sensor, four-in-one light fusion at f/1.8 aperture, the result of which, while appearing to be a general camera, it also gives you superb night shots that make your pictures crisp and clear in every night shot. 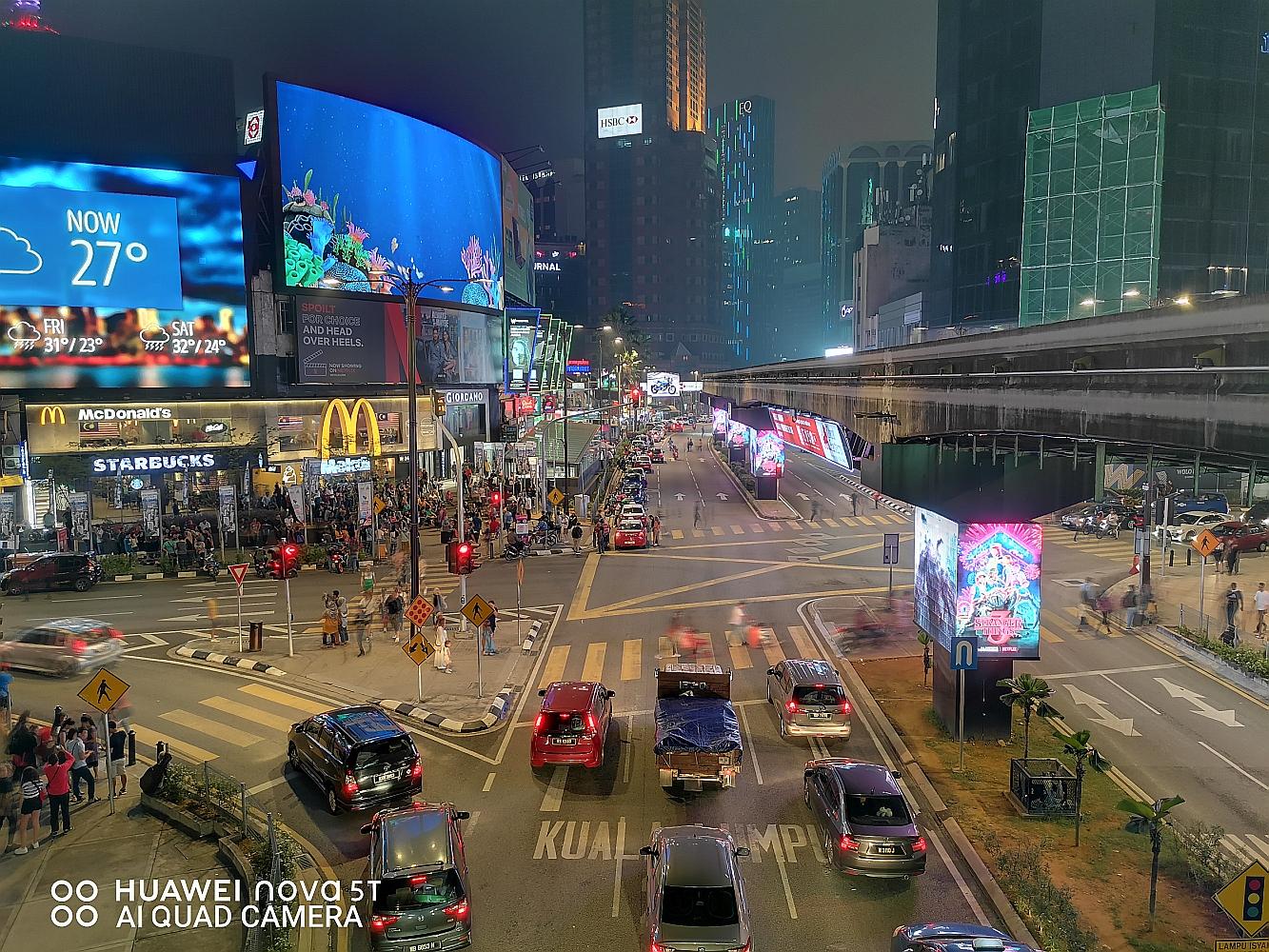 Selfie addicts aren’t at the loss – the front camera is a 32MP camera at f/2.0 aperture enhanced with 3D portrait lighting. It also has a four-in-one pixel fusion for brighter, clearer selfies. 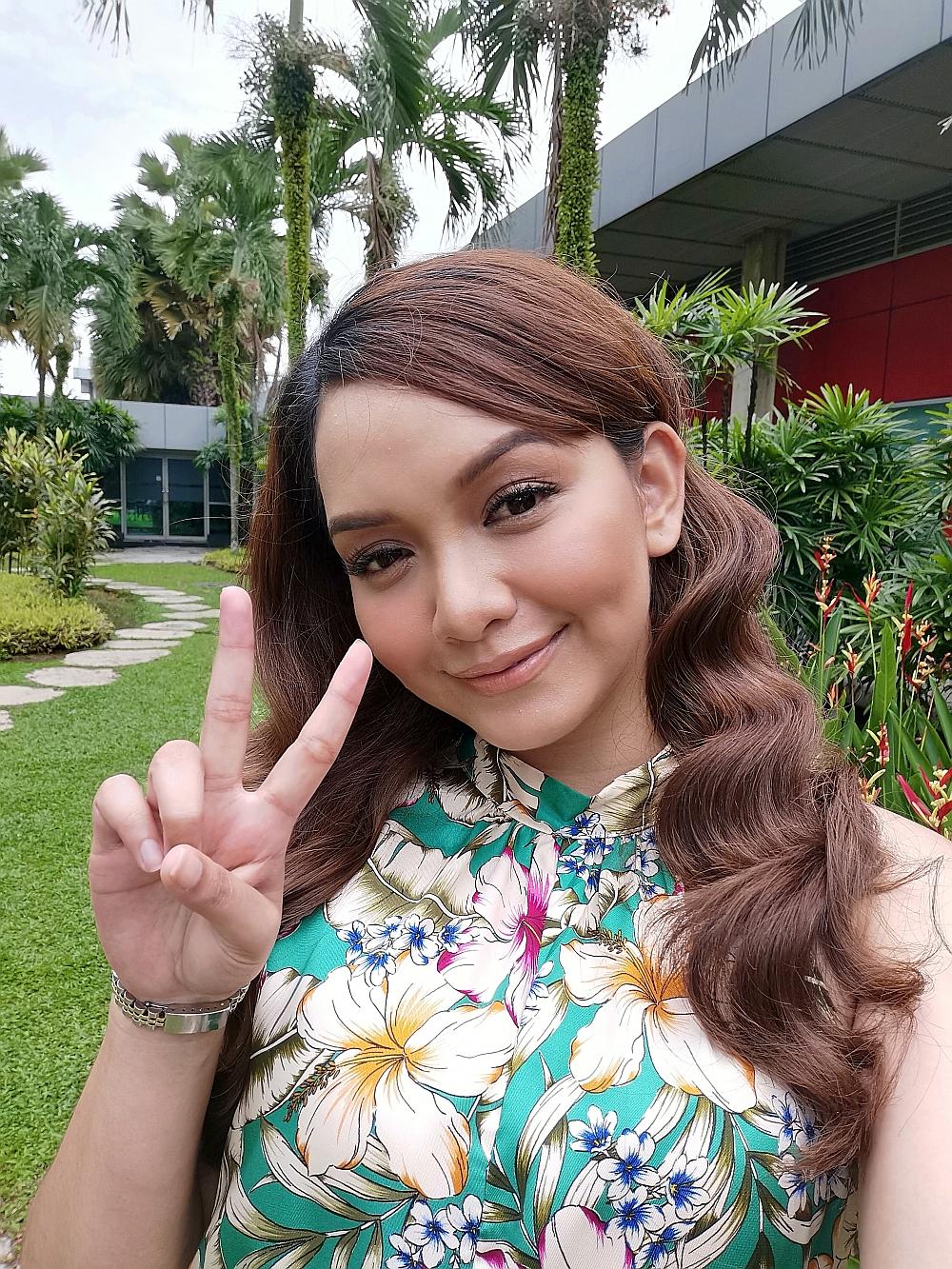 The front camera has with four separate AI systems to ensure you get perfect shots at each snap. These artificial intelligent algorithms help to engage high-definition resolution, balancing exposure against backlight, enhancing beautification and optimising scenes to recognise your current surroundings. 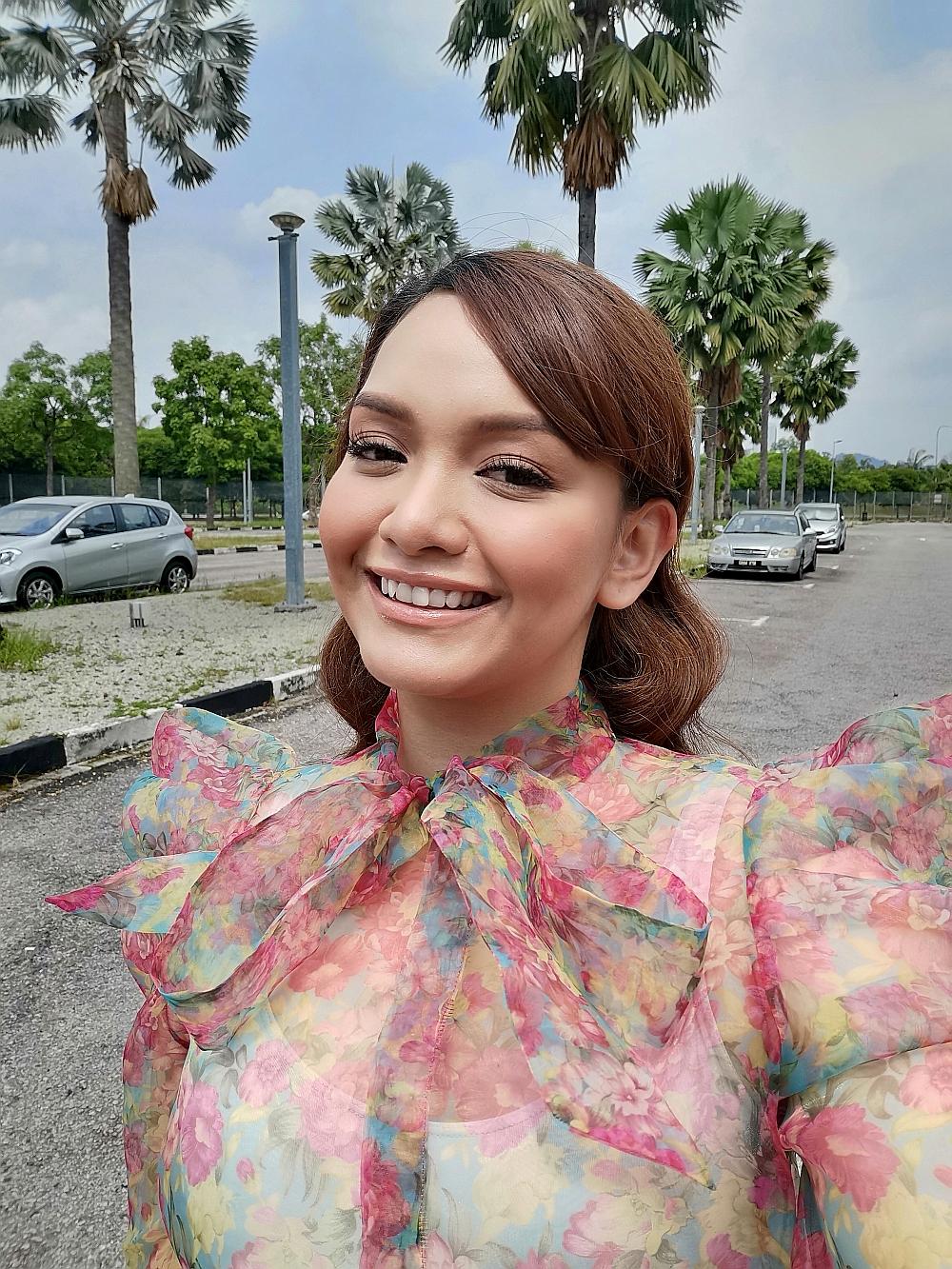 Another AI is fitted for overall image stabilisation and helps offset minute shakes when the phone is hand-held, plus a combination of up to 16 different exposure shots into one to produce a more stable image.

The Huawei nova 5T promised a 75% increase in CPU performance thanks to the world’s first 7mm mobile AI chipset – the Kirin 980.

When compared to the Kirin 970 model, this chip boosts camera processing by 46% and graphics processing unit (GPU) by 46% and overall AI performance by 120%. That is a whole lot of ambition. 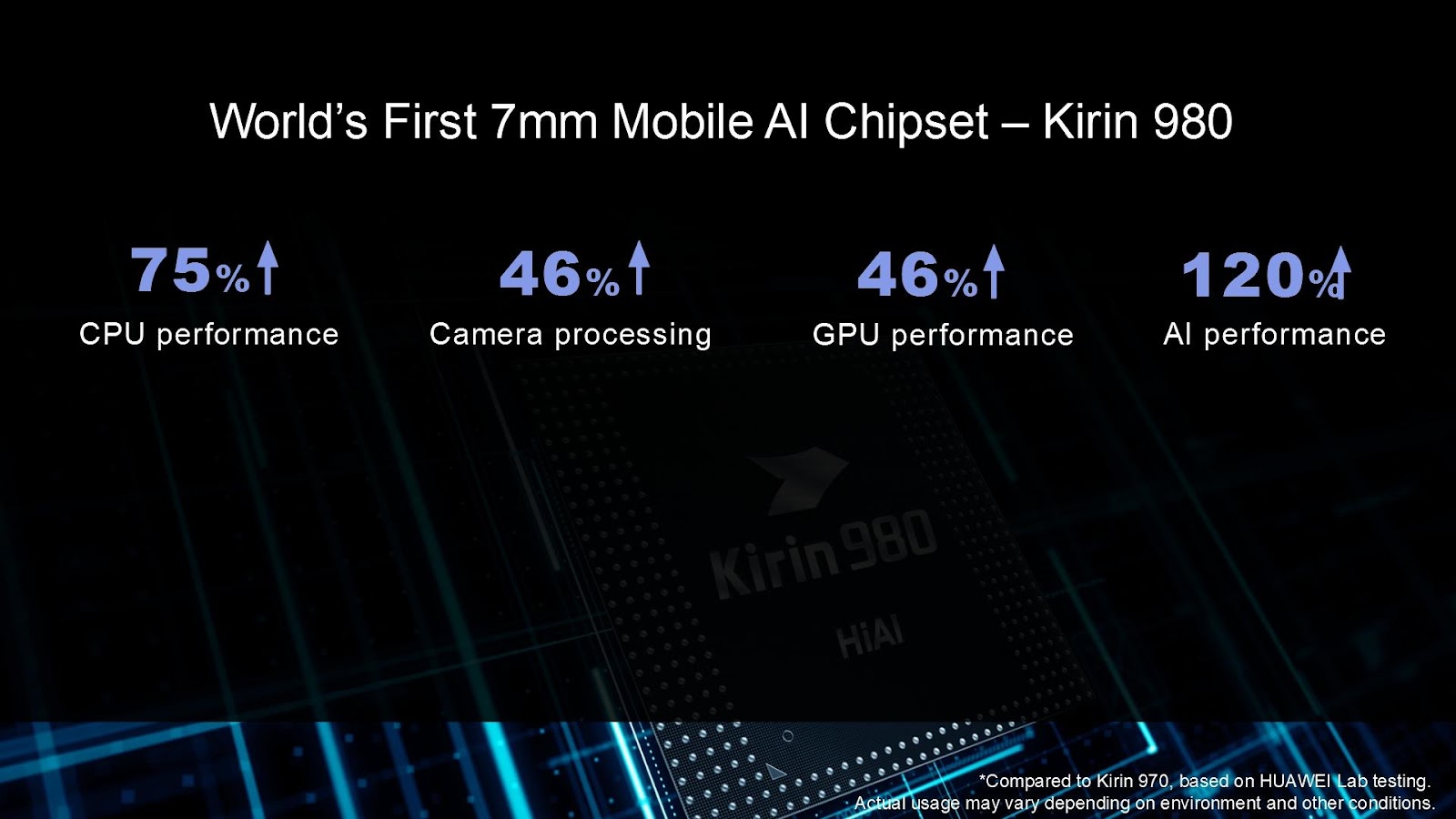 Τhe Kirin 980 powers the Huawei nova 5T boosting it with a 75% increase in CPU performance.

And with the nova 5T, the performance streaks through fast and furious especially during gameplay. Thanks in part to the GPU Turbo 3.0, games run at an impressive 60 frames-per-seconds, similar to 4K TVs, while the system-on-the-chip (SoC) helps reduce consumption by 100% and is available for most games.

In fact when put to the race between two other popular smartphone brands, the nova 5T still tops in its frame-rate performance.

Another important component that goes hand-in-hand with the graphics is sound, and the Huawei nova 5T just delivers a pure immersive experience with its virtual 9.1 surround sound. It also works on ear and headphones, which you can connect to via a Super Bluetooth connection that can be detected over 200m away.

You find a faster and smoother experience when you operate the Huawei nova 5T’s on-screen functions and while accessing apps, thanks largely to Huawei’s EMUI 9.1. This was optimised to offer at least a 59% increase when launching an app as compared to previous nova 4based models. It is at least 57% smoother too in its user interactions. 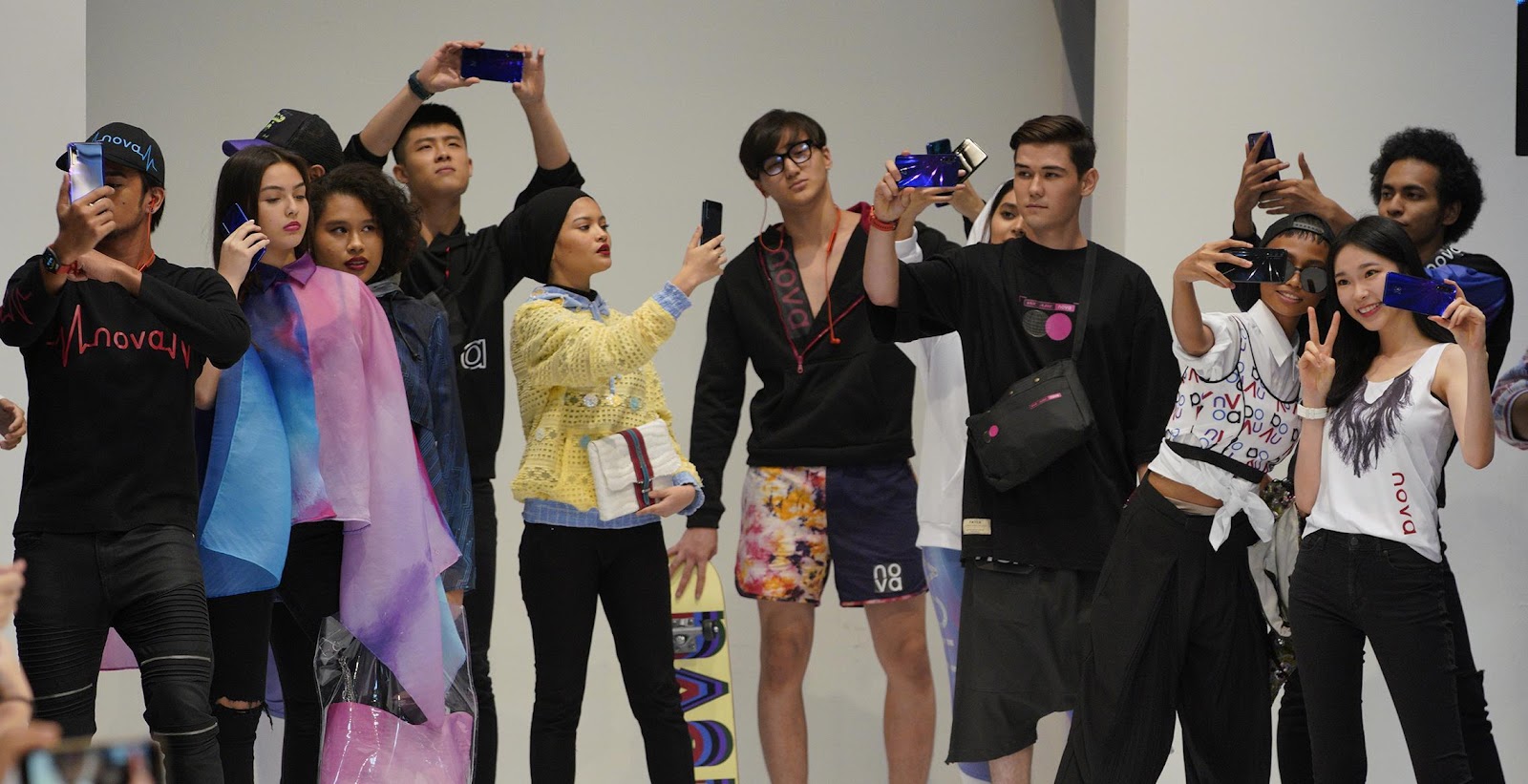 The nova 5T has an 8GB of random access memory (RAM) and 128GB memory for more ultra fast storage. No more need to delete previous pictures and songs, and you can walk around with videos that you can watch while waiting in trains.

Thanks to new EROFS file system you can access and move files faster to 20%, as compared to the latest generation’s Ext4 system used in Linux systems, and reduces use on system run-on-memory by 14% for more efficiency.

When it comes to longevity of the battery’s performance, this 3,750mAh powerpack can help charge up your whole day in just a single charge. It also uses a 22.5W super-charge unit that can juice up your battery from zero to 50% in just half-an-hour.

In fact by charging less, you help the battery in extending its life longer. 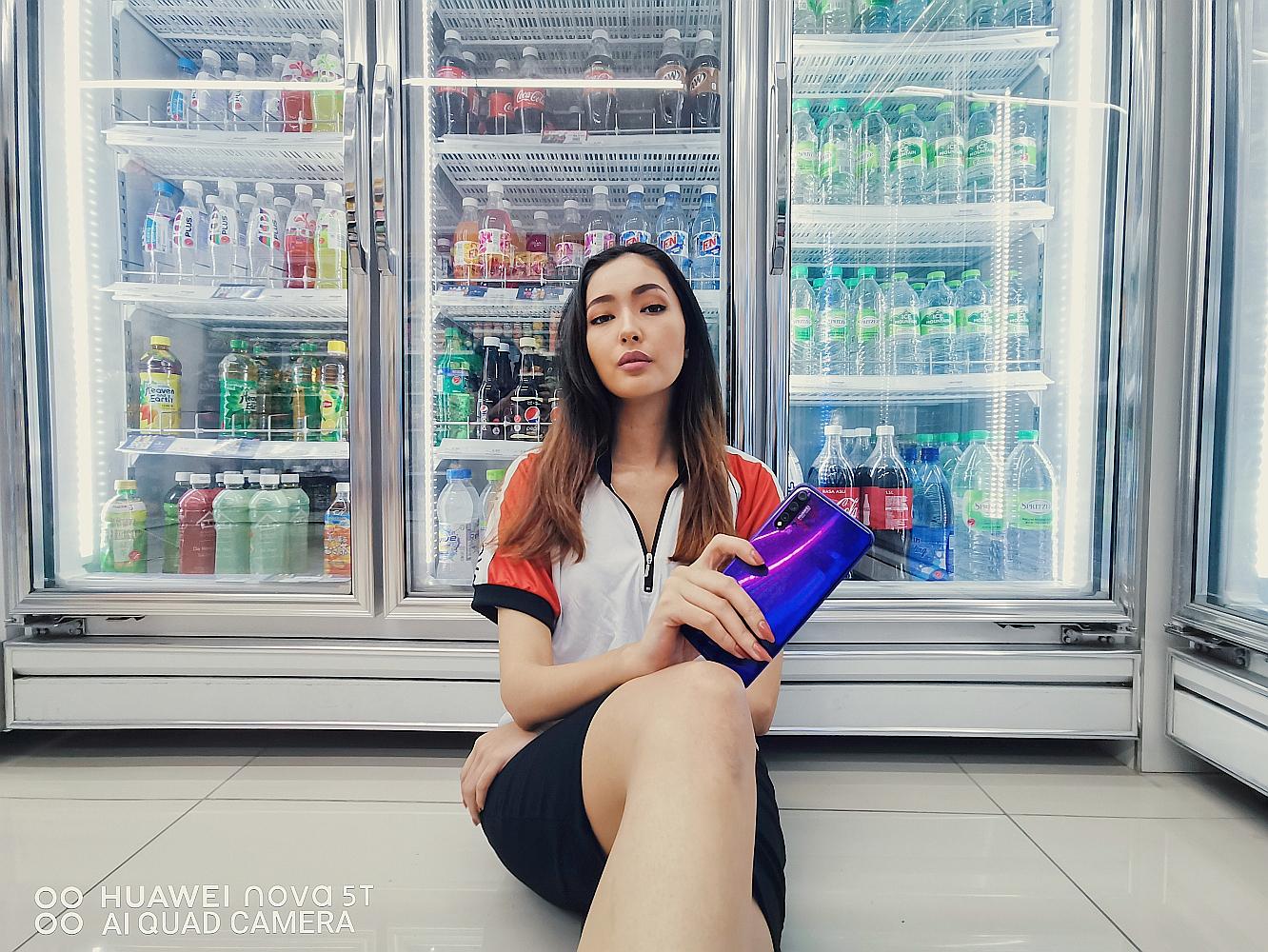 Your everyday attire goes hand-in-hand with exquisite design of the Huawei nova 5T.

This is encased in a sleek 2.5D glass back comes in an inspiring colour design of black, purple or blue, across the whole back of the phone that makes it easy to match whatever you are wearing.

The in-screen camera for front-view selfies is unobtrusive enough at 4.5mm and placed usually in line with the informational icons at the top of the screen.

It gives easy one-handed operation with an integrated fingerprint sensor at the side where right-hand thumbs usually go and can unlock at 0.3secs.

The Huawei nova 5T is affordable priced at RM1,599, which is a steal for all the power packed within the model.

When you pre order, you’ll also be eligible for exclusive gifts such as a Huawei Mini Speakers worth RM198, Huawei SuperCharge Car Charger worth RM127 and a one-year extended warranty (the offer ends on Sept 30,2019) – all in all a total price of a cool RM325 – valid when you order today

There is also a Level-up Programme that is offered to nova 5T users that will be available from Sept 7 onwards at all Huawei stores or at the pre-order webpage.

Those who wish to get hands-on with the Huawei nova 5T can visit Huawei roadshows, while for more information, visit the Huawei Online Store 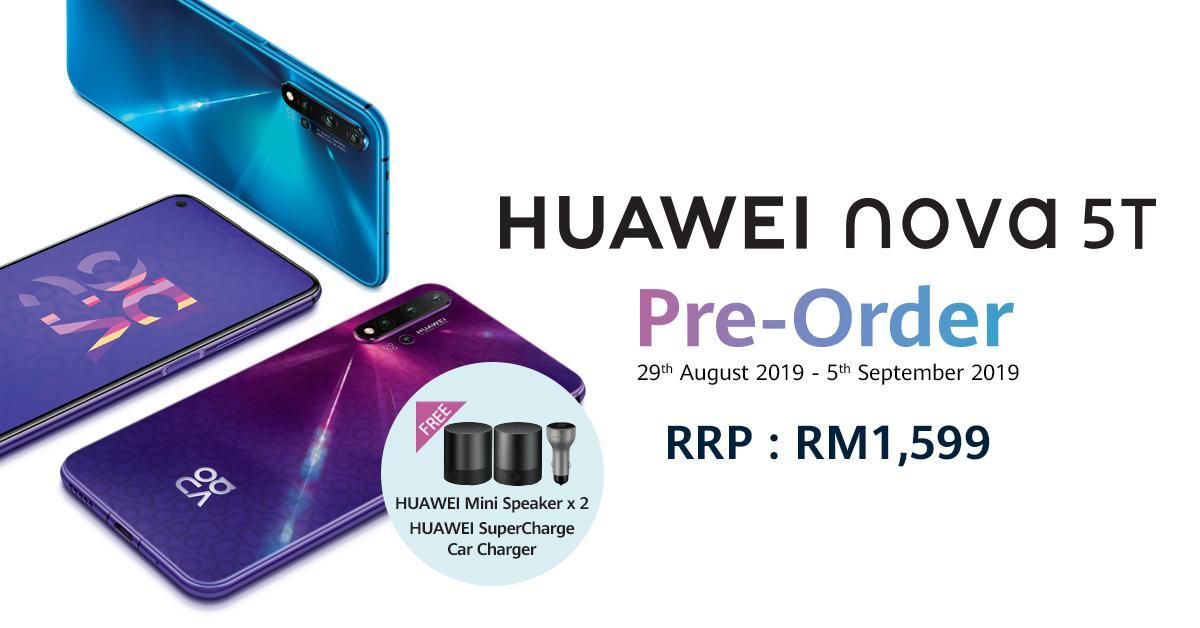 Besides Huawei’s Nova 5T pre order, there are also pre orders are also open for the MediaPad M5 Lite 10, which is fitted with multiple eye protection and Harman Kardon-certificated sound system, priced at RM1,299. 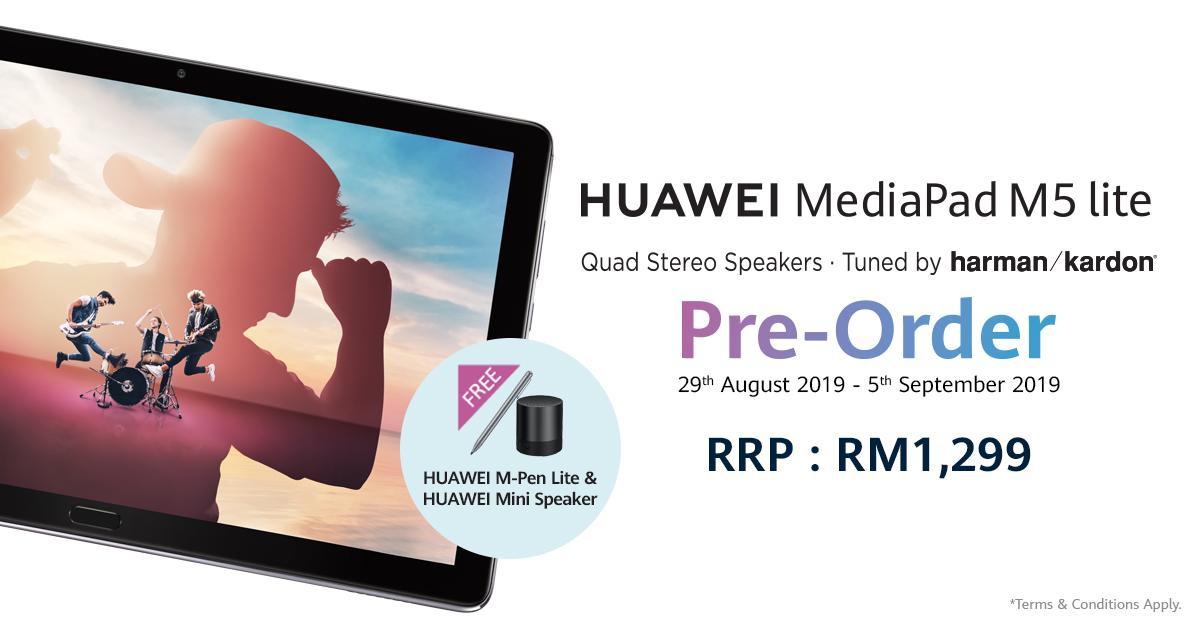 Order today and get exclusive gifts of a mini speaker and an Mpen that’s worth up to RM268 in total. It’s strictly on a first come, first serve basis at the Huawei Online Store.

Stay tuned for a new offer coming to you soon.