Realme, Samsung and Redmi recently announced their plans to launch smartphones with a 64 MP rear camera. Redmi is likely to unveil the camera technology in China today (7 August) while Realme will show off its 64 MP quad-camera technology tomorrow (8 August) in India.

Realme has confirmed this news by posting an image on Twitter. Further to this, it is being speculated that although Realme is just teasing the technology at tomorrow’s event, we are going to see a smartphone with that technology soon and that might be named Realme 5.

The company CEO Madhav Sheth has recently changed the username on Twitter to “Madhav ‘5’ Quad”. Since Chinese consider number four an unlucky number, it might be a possibility that after Realme 3 (Review), Realme 3 Pro (Review) and Realme 3i (review), we will be witnessing Realme 5. And since the username also says “Quad”, and the 64 MP camera technology image teased on twitter also shows off a rear quad-camera setup, Realme 5 could be the smartphone that the CEO is hinting towards.

But all this is just based on speculations and there is no confirmation on this yet. 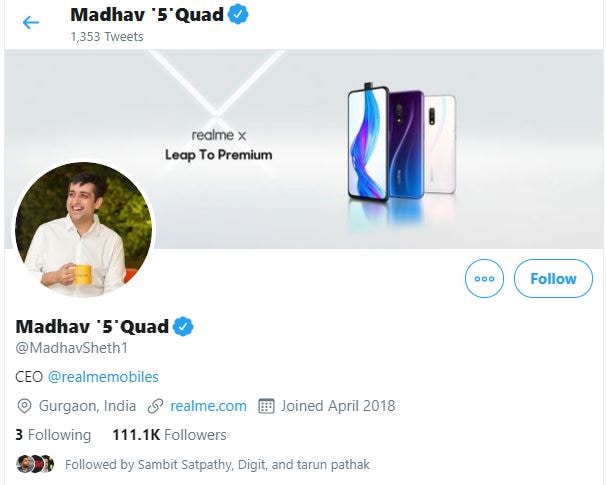 But looking at the old patterns, this is not the first time that Realme CEO has hinted towards the name of an upcoming smartphone in its Twitter username. He also changed his name to Madhav ‘X’ for the Realme X smartphone.