That was then. This is now.

Everything changed for space-based positioning, navigation and timing around the world on Dec. 23, 2018. Or maybe it didn’t. The innovations heralded by the launch of the first GPS III satellite will take years more to occur. We tabulate here the advances that Generation Three will bring over GPS-to-date, and review the timeline for their actual arrival.

While these new capabilities exist — in concept — in space, they can’t be leveraged on the ground (or in the air, or at sea) until a sufficient number of additional GPS III satellites have joined the constellation, and until a new ground control system comes online. This will occur — perhaps — in 2023. At that time the satellites’ talents will be unleashed.

“As more GPS III satellites join the constellation, it will bring better service at a lower cost to a technology that is now fully woven into the fabric of any modern civilization,” stated Lt. Gen. John Thompson, commander of the U.S. Air Force’s Space and Missile Systems Center and the Air Force’s program executive officer for space.

The many GPS III upgrades should make the service more reliable and accurate for civilians, more secure against those who want to jam military users, and more cyber-secure for everyone.

GPS constellations have grown through six major iterations since 1978. The sixth, GPS IIF, rose during the years 2010 to 2016. Those 12 satellites are all designed to last 12 years. Some of their notable features include the ability to receive software uploads, better jamming resistance and increased accuracy.

GPS III, the seventh generation, will launch nine more satellites to join SV01 already in space. GPS III SV02 is scheduled to launch in July of this year, SV03 in late 2019, and SV04 in 2020. The final III payload should rise in 2023. From that point on, the follow-on era of GPS IIIF takes over.

How Long, How Long? “Projections for how long the current constellation will [continue to] be fully capable have increased by nearly two years to June 2021, affording some buffer to offset any additional satellite delays,” reported the Government Accounting Office at the end of 2017. This provided some schedule buffer for launching the first GPS III satellite, but it did not reduce the desire to launch as soon as the booster rocket became available.

The new birds will introduce new capabilities to meet higher demands of both military and civilian users: once filled out, the GPS III constellation will bring three times better accuracy and up to eight times improved anti-jamming capabilities. Spacecraft life requirement will extend to 15 years, 25 percent longer than the latest GPS satellites and twice the original design life of the oldest satellites on orbit today.

GPS III will eventually actualize full M-code capability — carried aboard the IIR-Ms and IIFs but not yet completely implemented — in support of warfighter operations. GPS III M-code capability exceeds that of GPS IIR-M and GPS IIF.

GPS III will complete the deployment of the L2C civil signal and the L5 safety-of-life signal capabilities that began with GPS IIR-M and GPS IIF satellites.

Finally, GPS III will enact improved integrity: the ability of the satellite to detect and issue alerts on its own reduced accuracy, should that phenomenon ever occur.

Military Signal Power Up. Encrypted M-code signals will be up to eight times more powerful than currently. This makes them more reliable. but also enables the sats to overcome efforts to jam their signals. 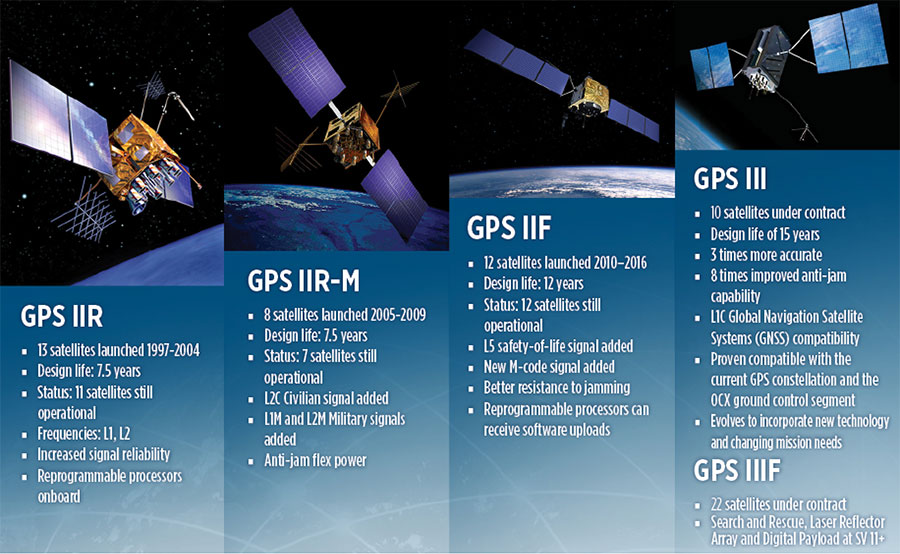 Family Features. The most recent generations of the GPS constellation. IIR, IIR-M and III were produced by Lockheed Martin, while IIF was built by Boeing. One GPS IIA satellite is still in operation, at 25 years young (design life was 7.5 years). All satellites carry Harris Corporation payloads. (Graphic sourced from: Lockheed Martin and Boeing Co.)

The first GPS III satellite is in checkout and testing that could last up to 18 months before it enters service. “After its Dec. 23 launch, GPS III SV01 successfully completed its orbit raising and deployment of all of its antennas and solar arrays. On Jan. 8, the satellite’s navigation payload began broadcasting navigation signals,” said Johnathon Caldwell, Lockheed Martin vice president for navigation systems. “On-orbit testing continues, but the navigation payload’s capabilities have exceeded expectations and the satellite is operating completely healthy.”

“We consider thermal vacuum the gold standard for testing any satellite before it goes into operations,” Col. Steve Whitney, director, GPS Directorate, wrote in GPS World in December. “It really is putting the craft through the paces. When it goes through the testing, the satellite is on. It is working. It is exposing it to the heat and the cold and the zero pressure while the satellite is functional. The entire thermal vac testing from start to end is about 70 days. Test like you fly. From the time it launches and deployment sequence, we test it like it is real. Minus the shaking, the satellite thinks it is getting launched. Meanwhile, our people are looking at the data and its health. TVAC is a huge milestone for a satellite to go through and come out no issues.”

To date, more than 90 percent of parts and materials for all 10 GPS III satellites have been received from more than 250 aerospace companies in 29 states.

BRAIN OF THE BUNCH 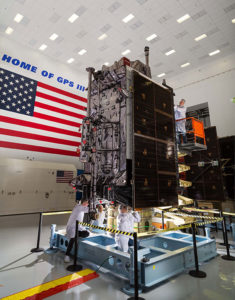 Harris Corporation is a subcontractor to Lockheed Martin for development and production of GPS III Mission Data Units (MDUs) and transmitters for the GPS space section. Six have been delivered.

The Harris MDU, together with the Atomic Frequency Standards and the L-band transmitter equipment, make up the Navigation Payload Element. The MDU performs the primary mission of the GPS satellite: generation of the navigation signals and data on a continuous basis. The MDU controls the generation of the precise timing signals used for navigation signals while distributing the timing signals to other satellite components.

This MDU is 70 percent digital. The next to come, aboard GPS IIIF satellites, will be fully digital.

When asked about the advantages of an all-digital payload, Harris Corporation’s Jason Hendrix, PNT program director, told GPS World in April 2018, “The advantages and the 30 percent difference are the timekeeping system portion. We’re moving from manual, analog timing to digital to deliver to the Air Force more flexibility. It’s a nice option to have to be able to reprogram in orbit and maybe enhance capabilities desired in the future.”

Greater mission longevity is one of the key improvements GPS III delivers over those currently in service. Space Vehicles 1–10 have a planned mission life of 15 years, 25 percent longer than their predecessors. That begs the question, “How long should a satellite live in space, with technology innovation occurring almost annually?”

Advanced payload technology provides a partial answer. Lockheed Martin and Harris point to new payload capabilities with built-in flexibility to adapt satellites in orbit to technology advances, as well as changes in missions. According to Harris, the fully digital navigation payload will provide the ability to change and upgrade the satellites incrementally over mission life.

In late 2017, Lockheed announced a partnership with NEC Corporation to introduce artificial intelligence for computer learning in orbit. The company touted significant advances in processors and a move toward next-generation antennas, arrays and transmitters to drive more satellite flexibility, capability and resilience.

FROM THE GROUND UP 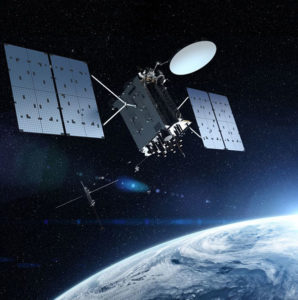 GPS IIIF’s M-Code can be broadcast from a high-gain directional antenna in a concentrated, high-powered spot beam, in addition to a wide-angle, full-Earth antenna. (Artist rendering: Lockheed Martin)

GPS III’s military upgrades require new ground control stations, a replacement effort called OCX that has suffered repeated delays and cost increases, due to the complexity of the programming and requirements modifications. The new jamming-resistant military signal will not be available until the new, highly complex ground control system is available, and that is not expected until 2022 or 2023. Delay and cost considerations were driven in part by full implementation of all Department of Defense 8500.2 “Defense in Depth” information assurance standards without waivers, giving it the highest level of cybersecurity protections of any DoD space system.

In 2018, wrote Col. Whitney of the GPS Directorate, “We have actively utilized the [Block 0] system in a variety of exercises, training events, compatibility tests and launch readiness events. We also completed a comprehensive security review of the system to demonstrate our readiness to start operations. The system is ready to go. We continue to work the development of the OCX Block 1 system and are wrapping up the initial coding of the system early in 2019, leading into our integration and test campaign.”

Given delays in OCX, “the Directorate is actively working two major upgrades to bridge the gap,” Whitney continued. “The first is GPS III Contingency Operations (COps) modification which will allow the 2nd Space Operations Squadron (2SOPS) to command and control the GPS III family of vehicles in a mission state matching today’s legacy signals for all users world-wide. The second modification is M-code early use (MCUE), which enables 2 SOPS to operationalize the Modernized GPS military (M-code) navigation signals for the warfighter.”

Before December’s launch, OCX underwent rigorous cybersecurity vulnerability assessments that tested the system’s ability to defend against both internal and external cyber threats. GPS OCX prevented the broadcast of corrupt navigation and timing data in all tests, bolstering the program’s readiness for GPS III.

“We’ve built a layered defense and implemented all information assurance requirements for the program into this system,” said Dave Wajsgras, president of Raytheon Intelligence, Information and Services. “The cyber threat will always change, so we’ve built OCX to evolve and to make sure it’s always operating at this level of protection.”

The new Harris navigation payload offers a smooth transition to use of OCX. The payload for the first 10 GPS III satellites has been verified for OCX compatibility so the same OCX commands will seamlessly port to the Harris fully digital design, minimizing integration risks and associated costs.

According the the GAO, “Full M-code capability —which includes both the ability to broadcast a signal via satellites and a ground system and user equipment to receive the signal — will take at least a decade once the services are able to deploy military GPS user equipment (MGUE) receivers in sufficient numbers.” The April 2019 issue of GPS World will review M-code implementation across U.S. DoD platforms.

THE FUTURE’S NOT OVER YET

In spring 2018, Lockheed Martin submitted a proposal for the GPS III Follow On (GPS IIIF) program, which will add enhanced capabilities to the satellites. New hardware — a high-gain directional antenna — aims signals in a spot beam at a limited area, but blasts the signal at high power for strategic use by the military.

Inter-Satellite Links. Block IIIF satellites will carry laser retro-reflectors to enable orbit tracking independently of the satellites’ radio signals, which in turn will allow satellite clock errors to be disentangled from ephemeris errors. A standard feature of GLONASS, this is included in the Galileo positioning system, and was flown as an experiment on two older GPS satellites, 35 and 36.

In September 2018, the Air Force selected Lockheed Martin to build up to 22 additional satellites under the GPS IIIF program.