Samsung’s Galaxy Watch Active is the follow-up to its Gear Sport, a stripped-down smartwatch focused on fitness tracking and glanceable notifications. At just $200, it’s much cheaper than the flagship $350 Galaxy Watch and the Apple Watch Series 4. Saving money often means sacrificing features, but the Active doesn’t lose out on much; it’s fast, swim-proof, has built-in GPS, includes a slew of fitness modes, and lasts a long time on a charge. However, it does give up a beloved piece of hardware that’s become a signature of Samsung’s other smartwatches: the rotating bezel. But the Galaxy Watch Active still strikes a very appealing balance for its price. I’d already call it one of the better options for Android users who understand its limitations, which I’ll get into below.

The Active’s design is fairly generic. It comes in nicer colors than the black variant I reviewed, but all of them share the same understated style that almost looks like something Pebble would have made. It’s not flashy, but it works. The 20mm bands are easy to replace, as well.

The Galaxy Watch Active’s most shining attribute is comfort. Its aluminum case is far lighter than the stainless steel Galaxy Watch or the Apple Watch Series 4, and it’s thin enough to not get caught up on shirt cuffs or outerwear. The watch rests flat on my wrist, and I quickly forget that I’m wearing it, whereas I never really “forget” that my stainless steel Series 4 is on. It’s such a pleasant fit that I’ve been able to sleep wearing the Active without any discomfort. The watch automatically switches into sleep-tracking mode when it detects that you’ve gone to bed. It breaks down the quality of your sleep based on how long you spent in each phase. None of this is unique among fitness wearables that offer sleep tracking (like a Fitbit), but it’s something the pricier Apple Watch still can’t do natively. 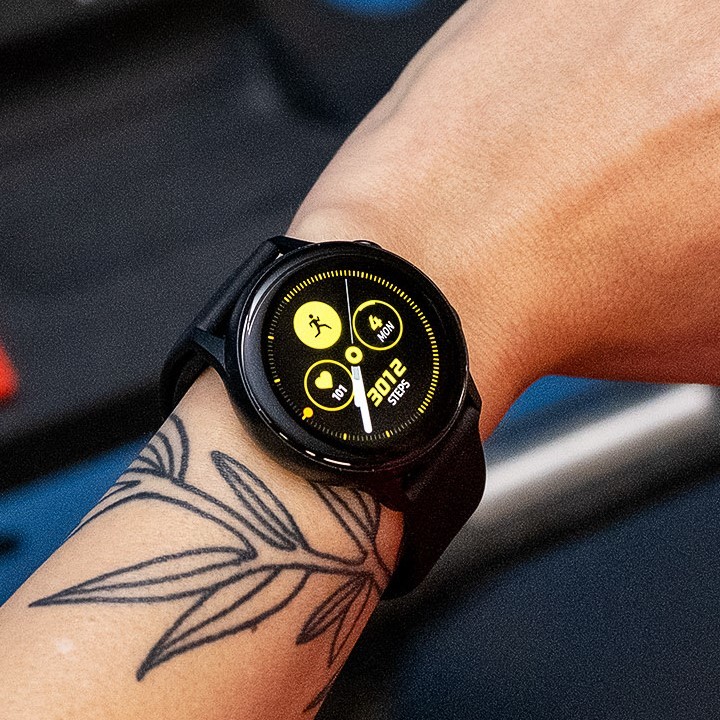 The trade-off for that comfort is a smaller screen, especially compared to the monstrous 46mm Galaxy Watch. The Active has a 40mm case with a significant bezel running around its 1.1-inch OLED display. I wouldn’t call it cramped, per se — content on-screen is perfectly legible, and you can tap where you need without many mistakes — but whereas the latest Apple Watch can sometimes feel like a computer on your wrist, the Galaxy Watch Active doesn’t leave that same impression. Some people might actually prefer that, and Samsung clearly cared more about fit than screen real estate this time around. Speaking of fit, the company includes two sizes of its silicone sport strap in the box; I immediately had to swap for the larger one.

The rotating bezel is sorely missed

But Samsung took something very important away from the Galaxy Watch Active: it lacks the rotating bezel that has proven to be an intuitive, natural, and fun control mechanism on the company’s other smartwatches. The Tizen Wearable OS 4.0 software is designed to put the display’s circular shape to good use, but navigating the Galaxy Watch Active can feel more finicky without the rotating bezel and its satisfying clicks.

For one, the watch’s software doesn’t really take into account this significant change in how you interact with it. The user experience is largely identical to that of the Galaxy Watch, and it’s clearly meant to work best with a rotating bezel that can quickly scroll through menus.

Relying only on taps and swipes (plus the physical back and home buttons) isn’t the end of the world, but it undeniably feels like more work. If the app you tap on in the apps drawer isn’t already highlighted, for example, you’ve got to tap a second time to open it. The Active is at least a pleasure to swipe across with its smooth glass top and curved edges. Your finger won’t be knocking into a raised bezel as with the Galaxy Watch. (Of course, that also means you run a higher risk of a shattered screen if you drop it.)

Tizen OS 4.0 runs very fluidly on the Active, which is powered by the same processor as the Galaxy Watch. From the main watchface, you can swipe down from the top for quick toggles / settings, swipe right to view your notifications, or swipe left to move between any widgets (alarms, calendar, music controls, sleep tracking, etc.) you want fast access to. Hold down on the main screen to switch to another watchface or download more; there are thousands of watchfaces available, which, frankly, seems hopeless to navigate through. But at least you’ve got options.

The built-in watchfaces were fine for my tastes. You can change the color of some, and others offer customizable complications to display the information most important to you. Samsung’s watchfaces don’t feel quite as data-rich as some of those on the Apple Watch Series 4, but, again, that probably has to do with the modest display. Pit this against a Fitbit Versa, and the comparison swings in Samsung’s favor.

Samsung does a good job of optimizing its wearable apps for a round display, but I still think some of the icons and user interface elements are ugly compared to the Apple Watch or Google’s revamped Wear OS. The company says there have been some visual tweaks inspired by its One UI design guidelines, but they’re barely noticeable. Plus, since Tizen is its own separate operating system, sometimes you’re required to install a “companion” app on your Android phone if you download watch apps such as Uber. That feels like unnecessary clutter. Many apps send basic notifications without any useful response actions, but you can customize which ones you want to reach your wrist.

Third-party app selection, in general, on the Active is dismal compared to Apple Watch and Wear OS, though Samsung has a few popular fitness apps like Strava on board. And the included Spotify app lets you download music for offline listening, which the Apple Watch version can’t yet do. That’s good news for runners, and it might be enough to sell some people on the Active. But there’s no such thing as Google Maps or Google Messages for Tizen.

Just as with Samsung’s phones, Bixby is a weak point on the Active. It sometimes fumbles the accuracy of dictated messages, and it will frequently steer you back to your phone for many questions if you go deeper than asking for the weather or telling it to fire off a text. At least Bixby is easier to just ignore when there’s not a dedicated button for it. I don’t foresee people using apps beyond those for music and fitness tracking on the Galaxy Watch Active very often. When you get notifications from messaging or email apps, you can choose from a list of canned responses or add your own custom reply. Failing that, you can scribble out a message letter by letter a la the Apple Watch if you really have no other option.

Samsung Pay is included for wireless payments, but only at terminals that support NFC; Samsung doesn’t include the MST technology found in flagship Galaxy phones that can mimic the magnetic stripe on credit / debit cards, allowing Samsung Pay to be used in many more situations.

It’s worth underlining that owners of Samsung phones get the best experience from the Galaxy Watch Active. It has versions of the company’s stock email and messaging apps on board, but no such luck for Gmail or Google’s Messages app. That’s disappointing for those using another Android device (or who dislike Samsung’s software). In either case, you’ll need the Galaxy Wearable app installed to get set up and adjust the watch’s settings.

Unfortunately, the watch’s main new health-related feature — blood pressure detection — wasn’t yet ready to test at press time. When it does launch, it’ll be in beta. Allow me to reiterate that you shouldn’t trust a consumer gadget to serve as your doctor or a miracle device that can sense all ailments. The Active’s sleep tracking seems fairly on point, automatic workout detection was surprisingly quick to recognize activity, and my daily steps lined up closely with an Apple Watch on my other wrist. So it hits the fundamentals and also has a water resistance rating of 5ATM, meaning even a deep swim won’t damage it.

Samsung’s Health app offers a ton of functionality; aside from collecting your workout totals and showcasing your progress, it can log your nutrition (food, water, and caffeine intake) if you’re willing to consistently input that data. Rounding out fitness, Samsung includes breathing / relaxation apps and a brand-new widget for tracking your weight. And if you’re still for too long, the Active will nudge you to do a set of torso twists rather than stand up.

I’ve been happy with the Galaxy Watch Active’s endurance so far despite the small 230mAh battery inside. Samsung claims it can go for 45 hours on a single charge, but that’s only a realistic number if you’re using GPS rarely (if at all) and keep the always-on display option disabled. Turning that on is a major hit to battery life. With default settings, I’ve been able to get through two work days before needing to charge. The Active can be juiced up when placed on the back of a Galaxy S10 through Samsung’s new PowerShare feature. Plopping it onto my Samsung wireless charging stand didn’t charge it, though, so you’ll need the Duo Dock if you want to go that route.

Very few iPhone owners are going to give much thought to buying a Galaxy Watch Active. For them, the Apple Watch is the objectively better choice. It’s got more apps, the software is nicer and more coherent, and its integration with iOS allows for richer notifications and easy one-tap actions when those notifications warrant a response. You’ll feel a lot more constrained using the Active with iOS than with Android.

Samsung’s real competition is Fitbit with its Versa and products like the Fossil Sport that run Wear OS and are at par with most of the Galaxy Watch Active’s features, albeit for a slightly higher price. At $200, the Galaxy Watch Active is a strong value that I’d probably consider before both of those, assuming you can go without the rotating bezel and won’t envy other smartwatches and their bigger screens. Using the Galaxy Watch Active might be less fun than Samsung’s other watches, but it’s still a good time overall.

Photography by Chris Welch / The Verge

Vox Media has affiliate partnerships. These do not influence editorial content, though Vox Media may earn commissions for products purchased via affiliate links. For more information, see our ethics policy.