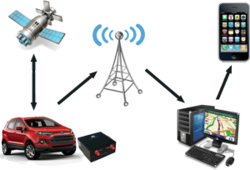 Here’s what the RouteSavvy GPS Fleet Tracking features can do:

Features available in the new RouteSavvy GPS tracking feature include:

The mandatory base license for RouteSavvy route optimization software is $300 per year. The optional RouteSavvy Tracker add-on license costs an additional $500 per year for up to 10 phones. Additional phones that needed to be tracked cost just $50 per year.

“GPS fleet tracking traditionally costs $20-$50 per vehicle per month, costing small fleets thousands of dollars per year, plus the cost of hardware, for a typical fleet tracking system,” said Steve Milroy, OnTerra Systems president. “In contrast, RouteSavvy GPS Tracker costs roughly $4 per vehicle per month with no extra hardware required. Our innovative, new, affordable approach to fleet tracking finally allows smaller fleets to gain the functionality of fleet tracking with one of the lowest prices on the market per year, low upfront costs that don’t include installing hardware in every vehicle, and fast ROI.”